‘Peak oil’ is getting closer, but now it’s driven by waning demand

For decades the debates about “peak oil” were about the moment production would start to decline. Now it’s about when demand starts to fall away and that moment appears to be drawing closer.

At the weekend the prospectus for the mega-float of Saudi Arabia’s state-owned Aramco – the world’s largest oil company and the most profitable company in the world – was launched. The Saudis plan to sell two or three per cent of Aramco in a book-build that starts next week and which is expected to value the company anywhere between about $US1.3 trillion and $US1.7 trillion ($1.9 trillion and $2.5 trillion).

The prospectus included forecasts from a respected industry consultant, IHS Markit, which concluded demand for oil to peak in about 2035. The prospectus also contains a scenario where demand could peak as early as the late 2020s.

Last week the Organisation of the Petroleum Exporting Companies (OPEC), the producers’ cartel led by the Saudis, issued its annual World Oil Outlook. It sees growth in demand rising but at a declining rate until it becomes negligible around 2040.

The International Energy Agency has said peak demand could occur as early as the late 2020s or in the 2030s. Royal Dutch Shell has forecast declining demand from the late 2020s while another of the “super majors”, BP, thinks the moment will come in the 2030s. BHP’s view of demand, provided at Monday’s Petroleum presentation, is fairly consistent with that of BP’s.

The OPEC analysis helps understand the variables that will determine when that moment of peak oil occurs. 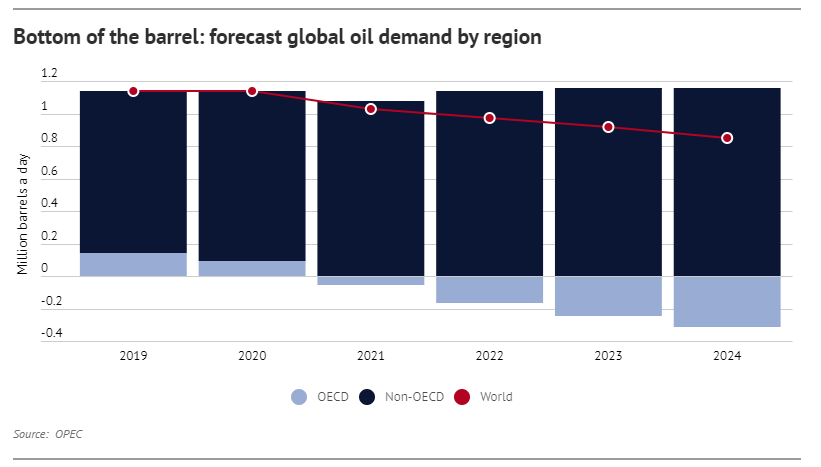 It sees oil demand from the Organisation for Economic Co-operation and Development (OPEC) countries, which includes the world’s most developed economies, shifting early next decade – starting in 2021 – from growth in their demand for oil to a long-term decline in their consumption.

Offsetting that decline will be growth in demand from non-OECD countries, most notably India and China, of about 12 million barrels a day.

The annual incremental growth in total demand is, however, expected to slow from 1.4 MMbd in 2018 to only about 0.5 MMbd towards the end of the 2020s and decelerate even further through to 2040.

Whether peak oil comes sooner or later depends on the response of the developed economies to climate change – whether they deliver on the Paris agreement and hold global temperature increases this century to less than two degrees above pre-industrial levels – and, in particular, the rate at which road transport is electrified.

The development of more energy-efficient aircraft and, perhaps, bio-fuels, could impact demand as aviation is the fastest-growing segment within the transport sector, underpinned by the burgeoning middle classes in Asia in particular.

A continuation of what has been a lengthy period of weak global economic growth since the global financial crisis will also influence demand, as will the substitution by other fuels, particularly natural gas.

The cap on sulphur emissions from marine fuels, for instance, has seen growing interest in the potential to switch to LNG to fuel ships. BHP plans to award a tender next year for its first LNG-powered vessel, a bulk carrier that will transport about 10 per cent of its annual iron ore production.

The other big factor that could influence the supply-demand equation is price. If the price were to fall significantly, improving oil’s price-competitiveness against alternative fuels, demand would probably hold up for longer than projected.

Against that, if the price were to slump, investment in future production would probably decline sharply too, impacting the supply side of the supply-demand equation and putting a floor under the price.

There’s an interesting trade-off for the Saudis and Aramco given that, as the world’s lowest-cost producer, it could maintain or increase its volumes – and it would certainly increase its market share from its current level of about 10 per cent – even if the overall market were to shrink and/or prices were to fall.

The fact of the float – and the fact that it is continuing even though oil prices have been weak and Aramco’s own profitability and risk profile have been damaged by the attacks on its main processing facilities in September – says that the Saudis are keen to diversify their finances and their vulnerability by reducing their near-total reliance on oil revenues.

That will be a longer-term process given the sheer size of Aramco relative to sharemarkets’ ability and willingness to absorb massive slabs of oil-related equity against the backdrop of a weakening appetite for fossil fuels in the developed world.

The start of that process, however, in less than favourable circumstances signals that the Saudis aren’t prepared to bet their future against the possibility that peak oil – a peak in demand rather than production – might occur sooner than anticipated.

Extracted from The Sydney Morning Herald