The offer of 50c-a-litre fuel has proved too tempting for many Queenslanders, with an estimated three kilometre line-up of cars banking up on a major road outside a service station south of Brisbane.

The Puma Energy at Woodridge in Logan offered the significant discount from 11am to 12pm on Friday as part of a promotion.

Aerial footage showed a long line up of cars on Kingston Road with little movement.

Bob Prasad, who owns MC’s Indian grocer on Kingston Road, said he could see the “bumper to bumper” traffic banked up long past his business which is about a kilometre away from the service station. 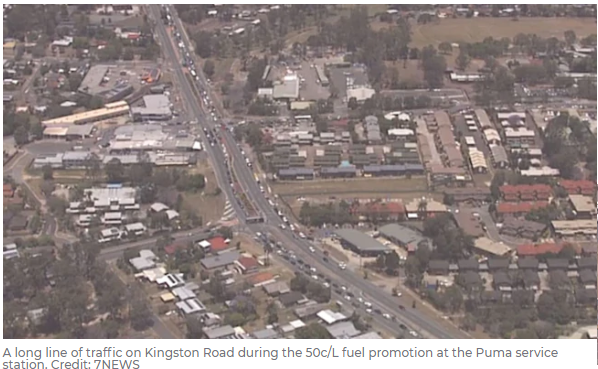 “They have a big queue one side of the road,” he told 7NEWS.com.au.

“It looks like it’s over two or three kilometres.

“The police there, they’re just controlling the service station entry and exit, but not on the road.”

It appeared many drivers missed out on the discount, with the line up remaining long as the promotion ended at midday.