Oil producers have more than a pandemic to worry about

The factors counting against a substantial long-term recovery in oil have been quietly stacking up. Joe Biden’s victory in the US presidential election is just the latest among many blow for oil bulls.

Oil executives are hardly alone in hoping 2021 will be better than the decidedly low bar of 2020. But even an effective COVID-19 vaccine may no longer provide a route out of the mess the industry finds itself in.

Eight months after the entire oil sector was first humbled by the demand-sapping pandemic, energy stocks have been buoyed by the first successful vaccine trial. Brent crude has risen almost 15 per cent to reach $US45 ($62) a barrel. The beaten-down shares of BP, Royal Dutch Shell and ExxonMobil have jumped between 12 per cent and 25 per cent.

Investors who missed the initial surge should be wary of the euphoria. Bearishness towards the sector was probably overdone, setting up a dramatic bounce at the first sign of good news. However, the industry has many more hurdles to come.

It is not just that vaccines will take time to roll out. Traders are increasingly betting the oil price is going to struggle to recover significantly even once coronavirus is brought under control.

Crude prices were wobbling before the vaccine news, thanks to renewed lockdowns in Europe. But the bigger concern for the industry is what the futures market is signalling.

Oil contracts for delivery years down the line are changing hands at levels to make oil executives wince.

Take the Brent crude contract for December 2023. Today it can be bought for just $US48 a barrel. That implies a rise of only about $US3 a barrel over the next three years from the current oil price. Yet oil was trading at $US70 a barrel as recently as January. 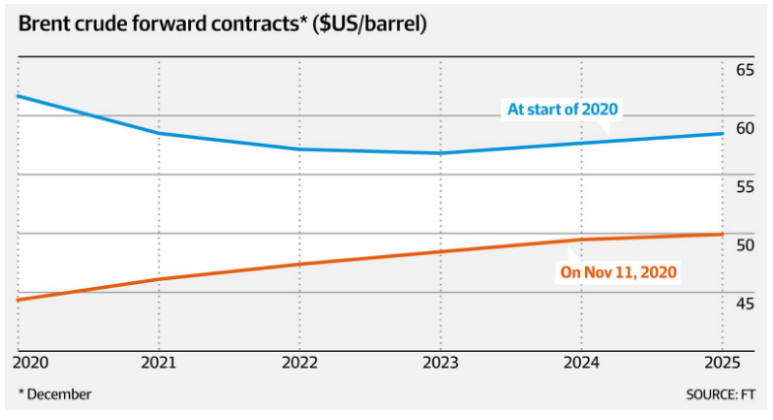 For 2025, when even the most Eeyore-ish trader must hope the pandemic will be a distant memory, Brent contracts rise to just $US49 a barrel. The same contracts are down more than 15 per cent from before the pandemic.

While the oil forward curve has a patchy reputation for accurately predicting prices, it does show expectations for the direction of travel. When crude prices are expected to be almost as depressed in 2025 as they are now, it is hard to conclude the pandemic is the only problem.

If oil traders are correct, and crude stays below $US50 a barrel for the foreseeable future, the prospects for the world’s largest oil companies start to look challenged.

That is why shares in both BP and ExxonMobil, which have mapped out markedly different futures, had each fallen below the levels plumbed in the darkest days of April, before this week’s bounce.

While environmentally minded investors might favour BP’s strategy, which involves investing more in renewables, it is just as reliant as Exxon, which is doubling down on hydrocarbons, on a stronger oil price over the next few years. BP needs the cash flows to help fund its renewables pivot.

The factors counting against a substantial long-term recovery in oil have been quietly stacking up. First, there’s simply too much spare capacity.

OPEC and Russia are already keeping almost 8 million barrels per day offline, providing a substantial buffer even if demand returns to pre-pandemic levels of 100 million b/d over the next couple of years from current levels of about 94 million b/d.

Rystad Energy says it expects global demand to peak as early as 2028 at just 102 million b/d. Crucially, government commitments to address climate change, including support for electric vehicles, have been strengthened rather than derailed by the economic fallout from the pandemic.

Demand of 102 million b/d is not an amount the industry will struggle to supply. New discoveries in places such as Guyana, a US shale sector primed to bounce back at the first hint of stronger prices, and a decade of learning to manage the decline of existing fields should mean supply is ample.

Joe Biden’s victory in the US presidential election is another blow for oil bulls. Some of his policies, such as proposals to limit new drilling on federal territory, may shave a few percentage points of growth off US production. But he has also said he wants to repair the Iran nuclear deal, a move that could lift sanctions and free that country to export about 2 million b/d. And the president-elect’s plans for the US to rejoin the Paris climate agreement adds momentum to a “green wave” building internationally.

There are still analysts willing to argue that an investment-starved oil industry will eventually lead to much higher prices. The oil cycle, they argue, cannot be broken. Low prices always usher in higher prices eventually.

But it is telling that if there are oil traders sympathetic to the argument, they are not showing their hand.