Coronavirus and oil: Why crude has been hit hard

The world’s biggest oil producers could be about to slash output as they grapple with the fallout of the coronavirus.

Representatives of oil producers’ cartel Opec and its allies are expected to meet this week as calls grow for action to support oil prices.

The cost of crude has hit its lowest level in a year after falling 20% since its peak in January.

Why have global oil prices fallen so much?

The spread of the coronavirus means the Lunar New Year holiday has been extended in much of China and travel restrictions are in place. As a result, factories, offices and shops remain shut.

That means the world’s biggest importer of crude oil, which usually consumes about 14 million barrels a day, needs a lot less oil to power machinery, fuel vehicles, and keep the lights on.

The outbreak is likely to have a particularly large impact on demand for jet fuel as airlines around the world suspend flights to China, and travel restrictions within the country mean far fewer flights. 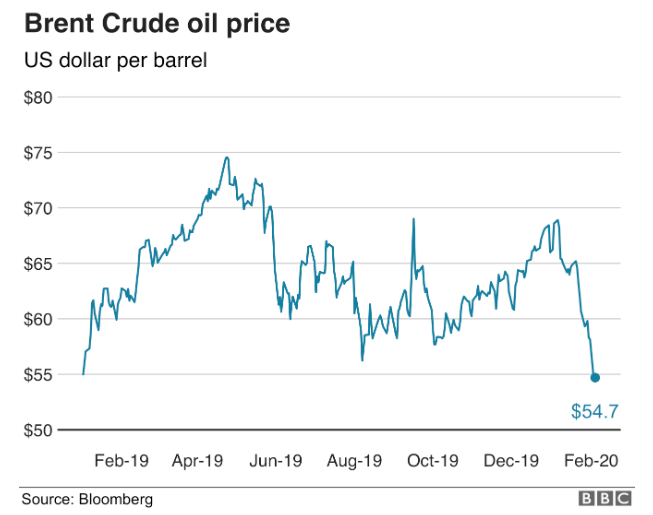 Bloomberg reported this week that China’s daily crude consumption had slumped by 20%, the equivalent of the UK and Italy’s oil needs combined.

In response, Asia’s largest oil refiner Sinopec, which is owned by the Chinese government, has cut the amount of crude it is processing by about 600,000 barrels per day, or 12%, its biggest cut in more than a decade.

The scale of the fall has shocked the energy industry, according to Chicago-based oil analyst Phil Flynn: “We have not seen a demand destruction event of this scale that moves this quickly.”

What does this tell us about the outbreak’s impact on the global economy?

The sharp fall in oil demand is a clear symptom of a drop in business activity in China and a sign that the country’s economic growth, which was already at a three decade low, will slow further.

Zhang Ming, an economist at government-backed think-tank the Chinese Academy of Social Sciences, has said the outbreak could push the country’s annual economic growth below 5% for the first three months of the year.

China is the world’s second largest economy and a key engine of global economic growth. Any negative impact in China is almost certain to ripple across the world.

This week the managing director of the International Monetary Fund, Kristalina Georgieva, said the epidemic was likely to slow world economic growth in at least the short term, but cautioned that it was still too early to tell further ahead: “We have to assess how quickly action is being taken to contain the spread of coronavirus and how effective this action is.”

What are oil producers expected to do?

The world’s biggest oil producers are said to be discussing more production cuts, on top of those which have been in place since 2016, to boost falling prices.

The statement came as so-called Opec+, which includes Russia, will reportedly discuss output cuts of between 500,000 and one million barrels a day at a meeting that is expected to take place this week.

Margaret Yang from CMC Markets said the market was expecting production to be cut by a 500,000 barrels a day, but added: “We won’t rule out an even deeper cut should the situation worsen.”