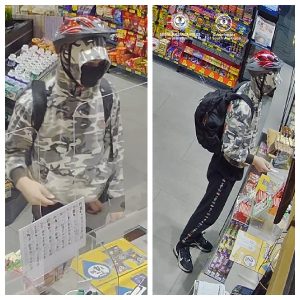 Police investigating an attempted robbery of a service station at Klemzig on Wednesday night have released CCTV images of the suspect.

Just before 11.30pm on Wednesday 24 November, a man entered the service station on North East Road, Klemzig armed with a small knife and demanded money.  He left empty handed after the two attendants yelled at him to leave.

Fortunately, they were not physically injured during the attempted robbery.

Police searched the area with the assistance of Police Dog Stoic but the suspect has not yet been located.

He is described as aged in his late teens or early 20s, of Caucasian appearance, about 170 cm tall, with a slim build, wearing a black face mask, grey camouflage print hoodie, dark trackpants, dark sneakers and a red bike helmet.  He was carrying a backpack and left on a white bicycle, last seen heading south on Reece Avenue.

Anyone who recognises the suspect or his clothing pictured in the CCTV images or has information that may assist the investigation is asked to contact Crime Stoppers on 1800 333 000 or online at www.crimestopperssa.com.au