International oil majors are manoeuvring into what could become a dominant position in Australia’s fast-growing renewable energy and storage sector, according to the global head of renewables at consultancy Rystad Energy.

They are driven by the plunge in generation costs, the need to green up their portfolios and the potential to save on gas supplies, Gero Farruggio said.

While French oil major Total and Italy’s ENI are the only global oil and gas majors to have renewables projects under construction here, both BP and Shell have several hundred megawatts of projects in the pipeline, Mr Farruggio said.

The trend will not be derailed by the return of the Coalition government, which has no policy framework for renewables after 2020, he said.

“These are global companies playing on a global stage,” Mr Farruggio said. “The trend towards reducing emissions will continue despite this election result.”

Although only just over 1 gigawatt of the circa 100 GW renewables and storage project pipeline in Australia is currently owned by upstream oil and gas companies, he expects that number to surge as they potentially invest or pick up interests in major solar and wind ventures.

Mr Farruggio said he expected BP’s Lightsource BP operation to break ground on its first solar project within weeks among its more than 400 megawatts of renewables capacity in development.

The venture was one of the winning bidders in Snowy Hydro’s renewable energy tender last year, which dramatically cut the cost of “firmed” renewables supply. The Australian portfolio, which includes a $130 million, 100 MW solar farm at West Wyalong approved by the NSW government this month, remains a small part of Lightsource BP’s global target for at least 8 GW of solar capacity by 2022. 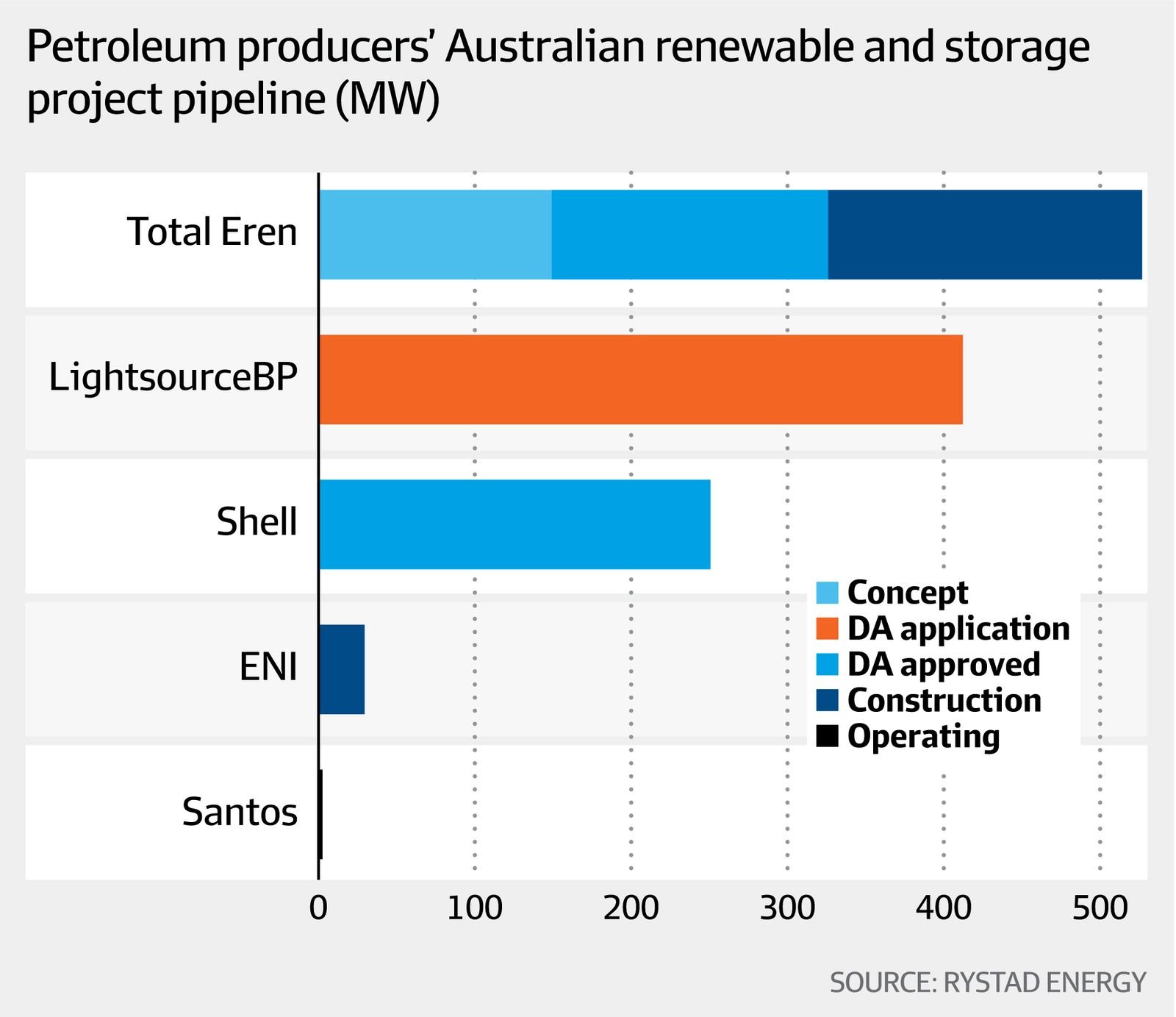 Shell locked in planning approval last August for the 250 MW Delga solar farm in Queensland’s Western Downs region. A Shell spokeswoman said a final investment decision was expected “shortly” on a 120 MW plant – presumably the first stage of Delga – which would help reduce the emissions footprint of its QGC gas operations in Queensland.

The Anglo-Dutch giant earlier this year raised eyebrows when it voiced ambitions to become the world’s largest electricity company by the 2030s and to shift its portfolio to reflect the global transition towards low-carbon energy sources. It bought German solar and storage company Sonnen in February, launching it into the home battery market.

“In time, we anticipate having a portfolio of new energies businesses operating in Australia, complementing our already strong gas production business,” the Shell spokeswoman said.

The most recent overseas oil entrant, ENI, acquired a solar-plus-storage project in Katherine in the Northern Territory in February, and signalled an interest in expanding to complement its existing gas business in Australia. The 33-megawatt solar plant is being built by contractor BSR and due to come online late this year.

Total’s Total Eren venture, meanwhile, formed by the French major in September 2017, is so far the biggest upstream player in the domestic renewables sector with about 450 MW of capacity, more than half of which is as yet undeveloped, according to Rystad.

So far, Australia’s oil and gas producers are bit-players in the action, although are getting in on the act.

Woodside Petroleum has installed a large battery on an offshore platform to cut costs and emissions, and is studying the potential for hydrogen production in WA, while also forming a venture to roll out 100 hydrogen refuelling stations in South Korea.

Santos is using solar PV backed up by storage to replace crude oil in pumps used at its Cooper Basin operations in central Australia. It is also working with ZEN Energy, now SIMEC Energy Australia, on a 2 MW behind-the-meter solar PV plant at Port Bonython in South Australia, which both reduces Santos’ exposure to electricity prices and its indirect emissions, Mr Farruggio noted.