A hand sanitiser sold at petrol stations around the country has been slammed as ineffective after failing independent testing.

The hand sanitiser, which claims to contain 75 per cent alcohol, only contained 52 per cent, testing found.

The required alcohol content for effective hand sanitiser is between 60 to 80 per cent.

“This second failure provides Minister Sukkar an opportunity to move quickly and implement the changes to hand sanitiser regulation that CHOICE has called for,” Price said. 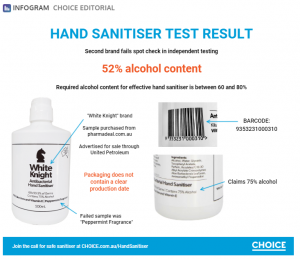 “Better labelling and a program of spot testing will help maintain people’s trust in this vital product.”

The findings were made after CHOICE conducted a second round of spot checks on 28 retail hand sanitisers.

The first hand sanitiser to fail was a bottle sold at Mosaic Brands stores and was labelled as 70 per cent alcohol when it in fact contained 23 per cent, CHOICE found.

Price said anyone who has purchased the White Knight sanitiser is recommended to “stop using it immediately”.

“CHOICE contacted White Knight Sanitation, an associated company of United Petroleum to advise them of the test results,” Price said.

“They told us they will immediately withdraw the product from sale in all United Petroleum outlets and conduct urgent testing of the product.

“This is what we expect to see and we thank the companies involved for taking the matter seriously.”

The 27 other hand sanitisers that were spot-checked were found to have effective levels of alcohol content.

7NEWS.com.au has reached out to United Petroleum for comment.